Here are some of the top reasons why Greta Thunberg is a pawn and a fraud, manufactured by PR firms and used by an army of globalist climate change alarmists that seek to gain more financial and political control. They are creating an apocalyptic cult obsesses with the end of the world.

Greta Thunberg recently arrived in New York, after traveling across the Atlantic to make a point about climate change. Over in America people might think Greta is a teenage superstar, but in Sweden she’s known as a publicity stunt. Nothing personal against Greta, I care very much about the climate myself. The theory of global warming isn’t entirely without merit, but there are better ways of caring for our earth and climate than sacrificing democracy. Sources & Recommended reading: https://angryforeignersources.blogspo… 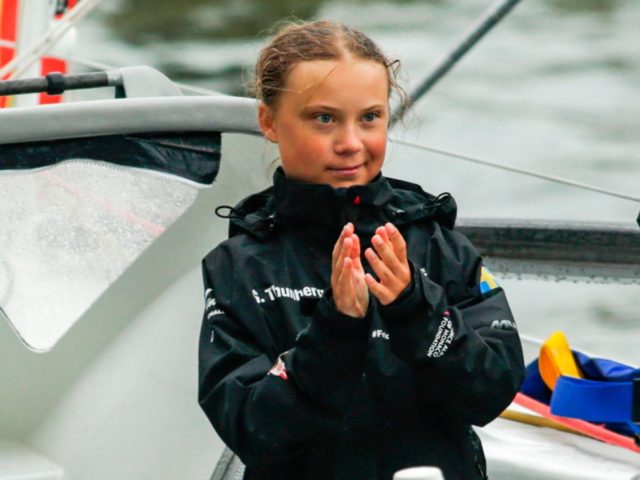 St Greta of Thunberg – Patron Saint of the Age of Stupid – has made landfall in the New World, there to preach to the unbelievers her gospel of imminent climate doom.

“The war on nature must end,” she has declared, to anyone who is listening.

Though St Greta has become a figure of huge influence in Europe – feted by Popes, presidents and prime ministers, lauded with uncritical coverage in the mainstream media, put forward for a Nobel Peace Prize – it seems likely that in the United States she will get a more mixed reception.

While the left will most certainly try to shoehorn her into their Green New Deal campaign, the right may be less convinced.

That’s because, unlike a worrying number of their counterparts across the pond, U.S. conservatives understand St Greta’s environmental scare narrative for what it is: a hoax.

Especially, it’s an anti-American hoax.  As Rupert Darwall describes in some detail in his book Green Tyranny (listen to the podcast interview here) the global warming scare was cooked up largely by European leftists (the Swedes and Germans being the worst offenders) with the purpose of destroying Western Industrial Civilization – U.S. Industrial Civilization in particular.

To understand how utterly specious St Greta’s gospel of apocalypse is, a good place to start is this excellent video by Tony Heller.

Heller has a nice line in dry sarcasm:

“Greta will go to the UN next week and read a speech which was carefully prepared for her by some of the world’s leading propagandists.”

And he has the measure of Greta’s propaganda litany:

“She will say that children of her generation face a terrible future of heat, famine, disease and every other imaginable natural disaster. Basically, she will describe a life which is the exact opposite of the charmed life that she is living. And her prophecies of doom will be described by the press as a magnet for hope. Her message of hope will be that if we simply lower carbon dioxide levels to those of the pre-industrial era everything will be fine…”

Did the world’s children really have it easier in the era before catastrophic man-made carbon emissions ruined everything?

Heller points out that just over a century ago, New York was in the grip of a polio epidemic. Are we really to believe that the children of tomorrow are going to be looking back enviously at their early 20th century forebears and wishing: “If only I could be crippled with polio, like kids were in the good old days!”

The polio epidemic spread all over the country. This 1916 photo was taken in Billings, Montana. (At least the children didn’t have to face an extra 0.0001 mole fraction CO2 in the atmosphere.)

Two years after the 1916 New York polio outbreak came the worst pandemic in history – the Spanish flu outbreak which killed as many as 40 million people, most of them young.

Greta – and those behind her – need to get a sense of historical perspective.

They also need a better grasp of climatology.

In the U.S. most of the hottest days in the last 100 years occurred during the early part of the 20th century.

US August 22 afternoon temperatures have been declining since 1895.

The likelihood of hot weather has also been declining, with recent years among the coolest on record.

Yet how often do you hear these climate facts from the alarmist mainstream media?

It has become a trope of the climate alarmist Establishment and its various useful idiots that to attack Greta Thunberg is somehow cruel or immoral or unfair; that the people who do so are motivated by misogyny or the bitterness of old age or all those payments they are getting from Big Oil…

The problem with Greta Thunberg is not that she’s a 16-year-old girl with pigtails.

The problem with Greta Thunberg is not that she’s a school drop out.

The problem with Greta Thunberg is not she’s autistic.

There are hundreds of thousands of other kids around the world with some or all of these features – and none is being criticised for having them.

No, the problem with Greta Thunberg is that no matter how brave or inspirational or articulate or touchingly young and fresh-faced or triumphant-over-mental-adversity she may be, the “facts” she regurgitates on behalf of her controllers are lies, propaganda and fake news – and the cause she represents is downright evil.

Strip away all the fluffy invocations of nature and the plight of future generations and the alleged crisis facing mother earth and what you find underneath is pure totalitarianism.

It’s no secret conspiracy. I wrote a book about it nearly ten years ago – Watermelons – and I can assure you there is nothing secret about the green movement’s totalitarian masterplan for anyone prepared to do a little background reading. Rather this is a conspiracy in plain sight.

And it’s a very dangerous conspiracy. If the green totalitarians get their way, standards of living will plummet, energy prices will become even less affordable than they are now, freedoms will become more constricted, more wildlife will be obliterated and more landscapes ruined by bat-chomping, bird-slicing eco-crucifixes, more money will be concentrated in the hand of a liberal-left oligarchy – none of it contributing the slightest material improvement to the state of the planet.

Greta Thunberg is currently the most prominent representative of that totalitarian movement.

Like it or not, cruel or no, that makes her the face of evil.