Senator Malcolm Roberts Exposing ‘Climate Crisis aka ‘Climate Change Scam! ⚠️ Elections have consequences, the beginning of the end of the CO2 caused climate change lie has started in Australia. Dr Tim Ball has presented in the Australian Senate on how the trillion dollar scam has been perpetrated and who is getting the money. Anyone interested in climate politics will be rewarded for finding 30 minutes to watch a video full of truth and facts that cannot be ignored.

. Tony Heller & Dr Tim Ball invited to the Australian Senate by Senator Malcolm Roberts Australian CSIRO ‘Commonwealth Scientific and Industrial Research Organisation’ grilled over it’s constant lies and failed climate change predictions, Australia’s Bureau Of Meteorology, ‘BOM’ is also another Climate change propaganda machine, the biggest in the world for pushing this massive hoax, the BOM are on record for saying, “What we really need is more funding to study the effects of climate.

⚠️ Most climate crisis (“climate change”) activists deny and/or willfully ignore worldwide overt & covert #GeoEngineering operations causing (local) extreme weathers and are do not see that the push for “Global Governance” connected to UN #Agenda21 & #Agenda2030 “The Global Tax” agenda hijacking their “fight” with mass corruption, study: #ClimateGate … Mass rollout of #5G death-towers ☠️ everywhere is part of the A.I. Surveillance #IoT smart-grid to micromanage all humans to “Save The Earth” bs. . Meanwhile the real reasons are not discussed: NWO Depopulation Agenda, crowd control, making Orwellian type dystopian society run by #PsychoTechnocrats inevitable. . The trillions of dollars/euros that is needed to “Combat CO2” (what plants breathe) is NOT spend on suppressed inventions another topic most “green activists” do not discuss! …They are used to PUSH a world conditioned for control-freaks to take over! (normalizing insanity!) . #JohnKuhles Founder #Stop5G Fb Group, Page & Stop5G.net 🦜🦋🌳 .

⚠️’Extinction Rebellion Surveillance Agenda helping to PUSH the Mass Rollout of #5G Smart Grid! https://www.facebook.com/Stop5G/video… ~The climate changes every day, that is a given … The “Climate Change” Scam (hoax) has to do with multiple bogus claims “who is doing what, where, how and how big and how often and how big is the effect of that” … “Global Warming Science” has been debunked & exposed not only scientifically but also proven to be a fraud done by corrupt people #ClimateGate … It all about how much power “Global Governance” should & could get and pushing the the “Global Tax Agenda” connected to even more Orwellian type of Government Surveillance. Law enforcers tracking “criminals” by NEW invented unconstitutional “Laws & Regulations” … They will and CAN call you a “criminal” losing your (privacy) rights because of that lame excuse. . So in short: We have Hijacked Governments criminalizing solutions (suppressed inventions/alternative cures) and … legalizing crimes by creating new insane (unconstitutional) laws that are pushed by corporatism (lobbyists paying-buying out corrupt politicians). The Law Enforcers become more and more an extension of serving the Big Corporations and less the people’s interest. (…) Time to Unslave Humanity!

. “Global Warming” Scare predictions in the 80s & 90s turned out to be a HOAX …. all part of NWO UN ‘Agenda 21’ pushing for ‘Global Tax’ & ‘Global Governance!’ … but the rise of (man made) extreme weathers worldwide is real … so it is GIVEN that there is “climate change” … like kicking an open door … when Solar Storms & Solar Winds coming from our Sun has an huge effect on ALL planets in our Solar System … centuries of ALL planets had & have planetary cooling or warming due to the Sun Effect has been PROVEN over and over and over and over again GOT THAT? So know why they playing with our perceptions! … and Yes Covert Man Made Extreme Weathers (Weather Wars aka Weather Modification are also Real!). . ~Covert NATO run (above nation laws) SRM ‘Solar Radiation Management … Geoengineering Projects – Aerosol Crimes – Chemtrails – Secret Weather Modification Wars (study the declassified government hearing on this topic) – Stratospheric Aerosol Injections – #GlobalDimming etc. etc.

We had a little trouble connecting in the beginning jump to 10 minutes to heat Dr. Tim Ball. BOOM Dr. Tim Ball joins us on a journey that uncovers the heart of the globalist deception – Global Warming/Climate Change. In this first part of the Tim Ball interview your eyes will be opened to the TRUTH about the deception. It is not your fault. The hypocrisy that the developed nations used fossil fuels to improve the length and quality of life and are now denying that opportunity to other nations is egregious. What makes it worse is that we know that the development the environmentalists oppose is the best way to reduce population and the pressures it brings. I wrote about what is called the demographic transition here. This hypocrisy is throughout all the environmentalist’s actions as they live the good life while telling others to live in poverty or at best reduced opportunity. Dr. Tim Ball exposes the malicious misuse of climate science as it was distorted by dishonest brokers to advance the political aspirations of the progressive left https://www.amazon.com/Deliberate-Cor… This book examines the claims of human induced global warming made by the Intergovernmental Panel on Climate Change (IPCC) using proper journalistic and investigative techniques. It explains how it was a premeditated, orchestrated deception, using science to impose a political agenda. It fooled a majority including most scientists. They assumed that other scientists would not produce science for a political agenda. German Physicist and meteorologist Klaus-Eckart Puls finally decided to look for himself. Here is what he discovered. Ten years ago I simply parroted what the IPCC told us. One day I started checking the facts and data—first I started with a sense of doubt but then I became outraged when I discovered that much of what the IPCC and the media were telling us was sheer nonsense and was not even supported by any scientific facts and measurements. To this day I still feel shame that as a scientist I made presentations of their science without first checking it.…scientifically it is sheer absurdity to think we can get a nice climate by turning a CO2 adjustment knob. This book uses the same approach used in investigative journalism. It examines the Who, What, Where, When, Why, and How.https://www.amazon.com/Human-Caused-G… Dr. Tim Ball’s Curriculum Vitae http://drtimball.com/_files/dr-tim-ba…

(NaturalNews) The ‘global warming/climate change’ charade is bad enough in that it is nothing more than a politically motivated “issue” used by globalists of all political stripes to gain more control over the world’s population. END_OF_DOCUMENT_TOKEN_TO_BE_REPLACED

It funny that people been told that the earth is warming and we to be blamed for all that warming and they believe it without question. And you been bought into the shame and panic that we are blame for the global warming of this planet. But is it true? Or is it a political movement for a political agenda; tyrannical governments in the past have use the environment as a excuse for their political agenda. Look like the environmental movement today is pushing for One World Government and doing through scientific fraud by tampering with data which they are recorded temperature throughout the centuries and decade; so it fit with their political agenda. This environmental political agenda is based the Marxist ideology which that doesn’t support for humankind throughout the world for a better world but bring in a one world totalitarian government which that total enslavement of all human beings throughout the world. Here 10 reasons you must do all in your power not to fall in and believe in the Global warming or Climate Change hypocrisy . And if you’ve were a believe and you just that all that Global warming and Climate change is not a problem I highly recommend you read this article further. But the alarmist would say “you’re a climate change denier.” Don’t listen to those climate alarmists they will try bully you and call you names but can ignore them or say “so what” END_OF_DOCUMENT_TOKEN_TO_BE_REPLACED

Hundreds of scientists sent a letter to lawmakers Thursday warning National Oceanic and Atmospheric Administration (NOAA) scientists may have violated federal laws when they published a 2015 study purporting to eliminate the 15-year “hiatus” in global warming from the temperature record. END_OF_DOCUMENT_TOKEN_TO_BE_REPLACED

On this LIVE Sunday, December 13 edition of the Alex Jones Show, we look into the pathetic hit piece against Infowars by the Washington Post which is being ridiculed on the Internet. And while the WaPo falsely claims Infowars pushes “fringe news,” CNN is actually dabbling into weird conspiracy theories by asking its viewers if they thought space aliens or time travelers could be responsible for the disappearance of Flight 370. We also break down the recent Paris “Climate Conference” which is nothing more than socialist wealth redistribution on a global scale. http://www.infowars.com/nearly-200-na…
http://www.infowars.com/paris-agreeme…
http://www.dailymail.co.uk/news/artic…
http://www.infowars.com/trump-tweets-…
Articles Written by Washington Post**
https://www.washingtonpost.com/news/t…
https://www.washingtonpost.com/news/t…
https://www.washingtonpost.com/lifest…

Global warming alarmists have been proven spectacularly wrong time and time again. So why should we believe them now? 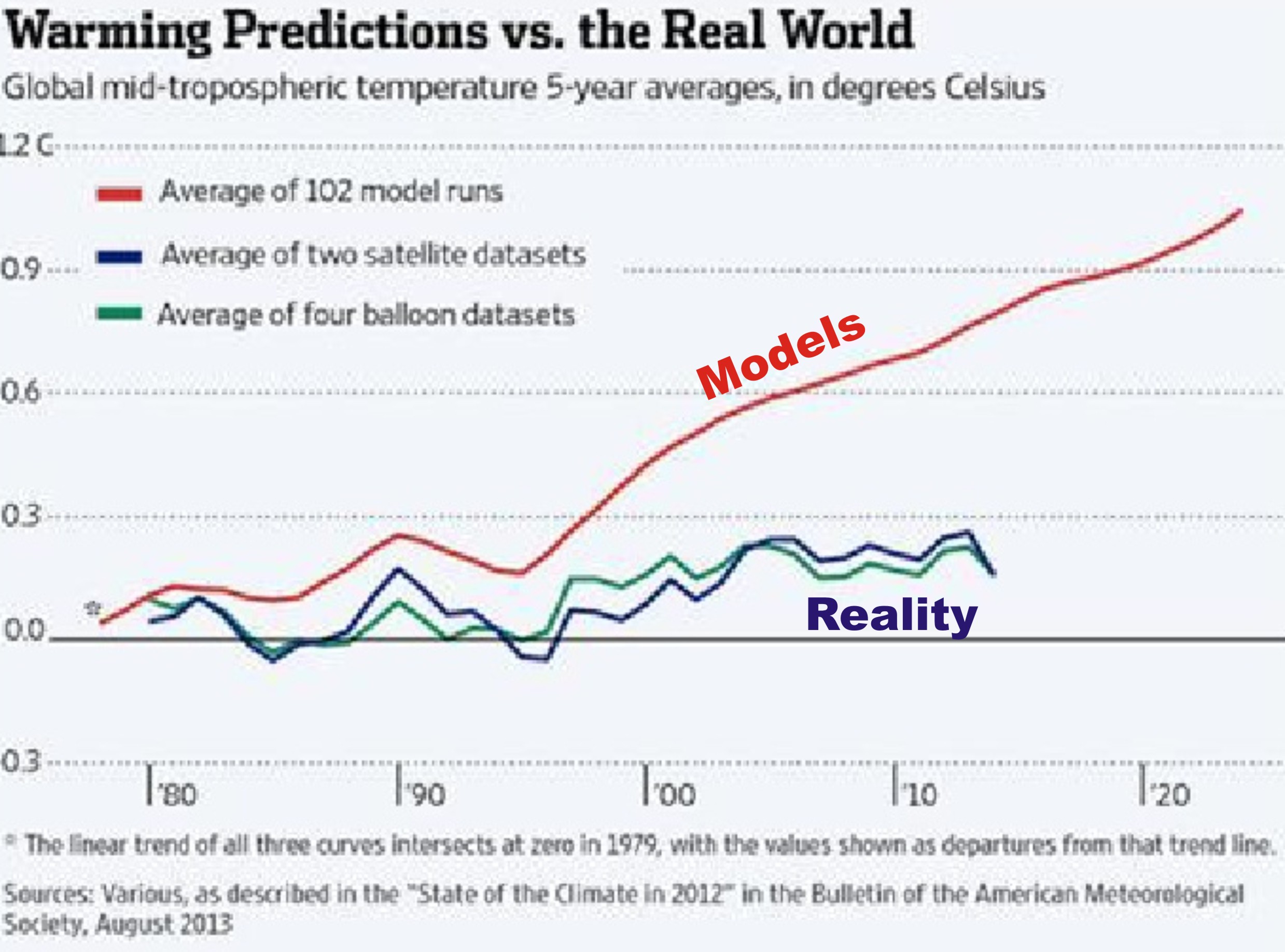 What could be more embarrassing for those who say climate science is “settled” than for scientific observations to reveal their dire predictions are not coming true?

Every day more scientific data emerge that poke cavernous holes into the warming narrative, and maybe that’s why some in the warmist camp are willing to tinker with the evidence.

Disturbingly, NOAA recently made a shoddy attempt to conjure up a 21st century “warming trend” by ignoring satellite data (the best available), and adjusting measurements from research buoys upward to match data from shipping – which is the least reliable.  END_OF_DOCUMENT_TOKEN_TO_BE_REPLACED