My Conclusion: Seed saving is extremity important. Since man discover how to harvest seed from plant and put the ground to grow another plant to produce more. When the idea of farming was invented it reduce the need to forage or hunt to for food and it another step that humans took in history. Growing food was root of civilization and it provided food security. The globalist want to stop us from being able to grow and produce our own food. Here in New Zealand where I live the government try to pass a law to make it illegal to grow and produce your own food. And when I first found about the Food Bill 160-2, I was hyperventilating back in 2011 because knew where Food Bill 160-2 leads and it was part the New World Order agenda. So people we need to learn how harvest seed and store them for the next season to fight the New World Order.

The Health Ranger explains why food storage isn’t enough to keep yourself fed. You also need to store FOOD POTENTIAL!

Don’t be dependent on government!

We all to take matters into our own hands by starting a garden, growing our own food and herbs, be educated. Even you never grown a plant from seed; start with the basics. We all can self efficient.

Imagine walking into a high rise building only to find out it was actually a vertical farm. As odd as this sounds, this type of building is popping up in different areas of the world as the idea promises new, environmentally friendly and rapid ways to feed growing populations.

The first commercial vertical farm was built in Singapore by Jack Ng who is an entrepreneur looking to supply food to Singapore’s densely populated city without having to buy a lot of highly priced land around the city. His vertical farm method is energy efficient, simple and mixes some ancient practices with new ones. The tower is modern and clear, so it looks great and allows sunlight into the the building for the plants. The produce grown in the building is sold under the name SkyGreens. You can find out more about how this vertical farm works in the video below.

END_OF_DOCUMENT_TOKEN_TO_BE_REPLACED

(NaturalNews) Food prices are now skyrocketing across the USA, says the Bureau of Labor Statistics (BLS). Their most recent report (1) reveals that prices of meat, poultry, fish and eggs leaped 7.7 percent over the last year. That’s nearly 367% higher than the official 2.1% inflation rate claimed by the federal government. (2)

Prices on these food items have risen 664% in the last five decades, according to the BLS, but much of the price acceleration has happened in just the last few years… and there’s no end in sight.

While the federal government tries to blame rising food prices on global warming — because seemingly everything is now attributed to climate change, including depression and divorces — the far more sobering truth is that conventional agriculture is reaching a point of systemic, catastrophic failure. END_OF_DOCUMENT_TOKEN_TO_BE_REPLACED

Most plant cross the world produce seeds so the new plants of the same species will keep on growing from one generation to the next generation. Other Plant don’t have depend on seeds for the next generation because plant that grow from runners, tubers, bulbs and taproot and some of them do regrow from this roots. Nature does have a way with life. Reason why we collect seed and save them for the next grow season so we can sow them or we eat some seed because there are seed that are eatable.
While New Zealand and some other countries are beginning to be under cooperate control or religious control which has nothing to do with benefiting the individuals but the corporation and the religious deity itself. And it not about keeping the individuals healthy and independent from the system but keep the individuals depended on the system. And I’ll say that “It’s time to free ourselves from this corrupt cooperate or religious system which it is design to keep us enslaved” How do we free ourselves from the corrupt system? Collecting seed from plants when the plant is going to seed [for the next generation of the plant] is one of them.
Why I start collecting seeds from plant? I started learn to how to collect seeds from plant because one day the food bill 160-2 will one day be passed into law. The Food Bill 160-2 off cause has nothing to do with keeping the food safe for individuals it’s all about cooperation enslavement and who benefits from the food bill? The government and corporations itself. Collecting seeds from the plants help to free yourself the food and seeds cooperates and it a revolution against the New World Order agenda. Only time the New World Order, The Corporations will win; is that we give into it.
When I started collecting seeds; the first plant I remember collecting seeds from; is the Sunflower and here the table of my seeds collecting knowledge.
Plants: How collects Seeds
Lettuce: Yes after the flower die down they start to go to seeds
Brassicas (Kale, cabbages, mustard plant, broccoli, Brussels sprouts, cauliflowers): After brassica plant grow after starting flower then they produce pod which that will contains the seeds
Tomatoes, Peppers, Eggplants: Yes tomatoes and Peppers and seed are inside the fruit put haven’t yet seeds from the egg plant
Potatoes: Yes plants grow from the tubers
Cucurbits (Pumpkins, water melon): Most Cucurbits plant the seed are inside the fruit that Know how to collect from
Carrots: Unknown
Beetroot: Unknown
Onion, Garlic: Yes garlic can grow from blub as well as onion they to start produce seeds after they flower
Strawberries New strawberries plant from the runners from the mother plant.
Peas Seed are produce inside the pods
Beans Seed are produce inside the pods

Kay Baxter, director of the Koanga Institute, is on a mission to save New Zealand’s heritage seeds.

She’s touring the country to share her knowledge about what we’ve lost in plant variety, food, and gardening.

“The United Nations estimated 20 years ago we’d already lost 90 percent of our heritage vegetables that we had 100 years before,” she says. “What we’re losing are the food plants that were selected and bred over many thousands of years to nourish us.”
More on 3News

Wanting to help the Koanga Institute mission to save the New Zealand’s Heritage seeds; click on the website link below.
www.koanga.org.nz
And feel free donate or join as member on the Koanga webpage. 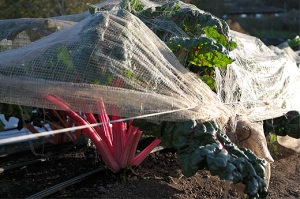 Sure, every year is a great year to start a vegetable garden, but this year I kind of realized how Noah must have felt when he decided it might be a good time to build an ark.

I first got the feeling when I saw all the dead and dry fields of California. A little alarm went off that food prices are going to be steep this summer as a result of the drought. Then I read in The New York Times about how even California residents are shopping as usual, not realizing the grave impact of what’s happening in their own backyard.

It all reminded me of what happens when the stock market crashes. It’s a big news headline, but people just go on living their lives until suddenly, they don’t have jobs anymore. It’s months or sometimes years later when it becomes real.
More…

Spring is almost here. In fact, it’s in the mail! Seed catalogs begin to arrive during the winter in hopes of enticing faithful gardeners to get a jump on planning their spring gardens. And with good reason – ordering your seed from seed catalogs is one of the best ways to get more bang for your buck out in the garden. Seeds cost significantly less than transplants at your local store, and this can save you a nice chunk of change, especially if you grow more than a few plants each year.
More…